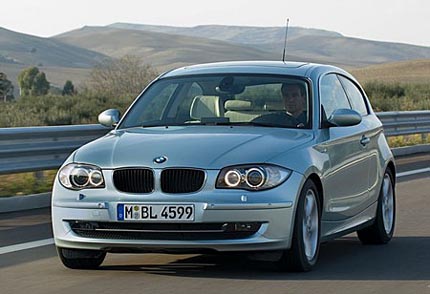 We were pretty certain that the BMW 1-series was heading to the United States, but now we can know for sure. BMW has officially confirmed that the entry-level hatchback is bound for North America in the form of the 135i, a tight little package powered by a twin-turbo 3-liter inline-six engine (that’s a lot of hyphens). A little further down the road, they hope to also introduce the cheaper 130i model as well.

But wait, there’s more. It’s not just the hatchback that will hitting our shores. According to Winding Road, the BMW 1-series will be offered in the United States as a convertible and a coupe as well, though it’s unclear exactly when those additional models will make their first appearance. If you’re looking for more fuel efficiency, though, you may have to wait until the Bavarian automaker produces a “proper turbocharged four-cylinder engine” (which may be sooner than you think).

As expected, the BMW 1-series will be priced below the 3-series (obviously), but it will be distinctly more high-end (and more expensive) than the Mini Cooper.