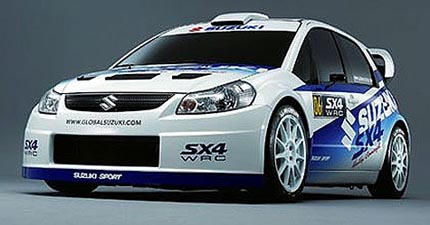 What are the first two cars that come to mind when you consider the legendary World Rally Championships (WRC)? Subaru has got their bases covered with the WRX and Mitsubishi is well-known for their Lancer Evolution. Sure, there are also entries from Peugeot and Citroen, but who would have thought that the latest automaker to throw their name into the WRC hat would be Suzuki? Well, that’s exactly the case, and they’re working on a souped up SX4 specifically for rally purposes.

Obviously, the WRC car will only be based on the SX4 platform. There’s a whole lot of extra work that’ll go into the rally car, including full-time AWD, a beefy turbo to boost the 2.0L DOHC engine, and a whack of aerodynamics and graphics for good measure. We’re not sure how much power Suzuki’s car will have, but estimates are ranging from 200hp (according to CarsGuide) to 320hp (according to insideline). In fact, the latter estimate is paired with 470 lbs-ft of torque. That’s a lot of pull for such a compact car.

The plan is to have Suzuki’s freshman entry ready for the 2008 WRC season.