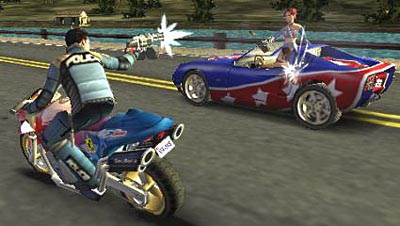 I haven’t had a chance to really sit down and enjoy the original Pursuit Force for the PlayStation Portable, but I did have a quick five or ten-minute session with at my local EB Games some time back. It seemed like a lot of fun, combining everything that makes a Hollywood blockbuster such a success. Well, turns out that the original game was so great that the developers are working on a sequel to the PSP’s Pursuit Force, to be subtitled “Extreme Justice.” More car chases, more gun fights, and more mayhem are sure to ensue.

Sure, the first title was a little short and a tad shallow, but it was certainly fun while it lasted. I expect more of the same with this second offering, which will also be making an appearance the home-based PlayStation 2. In Extreme Justice, you’ll keep hijacking jet skis and helicopters, as well as shooting down a wide range of bad guys. You can even enjoy 4-player ad-hoc multiplayer on the PSP. Sweet.