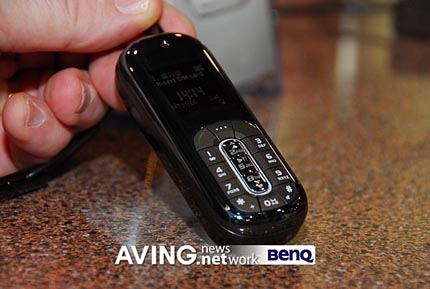 I’m not entirely sure if this is a new phone altogether or simply a repackaged and re-marketed version of the Black Pearl we heard about last October, but whatever the case, Haier was seen flaunting the “new” Y-MP3190 Elegance cell phone at CES 2007. On the whole, the “Elegance” bears quite the striking resemblance to the less-than-impressive Black Pearl which preceded it, except you’ll notice that the color scheme for the keys has been switched around just a touch, replacing the silver keys in the middle (2,5,8) with black ones. No Batman content this time around, though.

As far as the specs, they read exactly the same as the Black Pearl, meaning you’ll get the same compact form factor, OLED display, integrated MP3 player, FM tuner, stereo Bluetooth, and microSD expansion, though they mention 128MB of internal memory for this round. Look for the revitalized Haier Y-MP3190 “Elegance” to start shipping in February. It is a GSM tri-bander (900/1800/1900) designed for Europe, but they’ve also got the identically-equipped Y-MP3850 for the US market, sporting two North America-friendly GSM bands (850/1900).