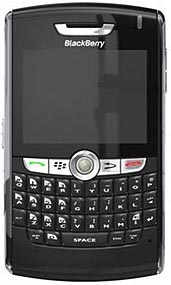 First up, the 8800, which is basically a Pearl with a QWERTY keyboard instead of that SureType business, is scheduled for launch next month. Like so many other products in their lineup, this BlackBerry is geared towards business and email, and such, it seemingly lacks a camera, contrary to prior reports. Moreover, the Cingular version will not have WiFi. The keys themselves are similar to the non-Pearl 8700, except they’re “just a tad shorter.”