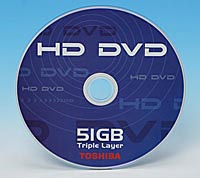 And so the new-gen battle for optical discs continues. Blu-ray Discs, thus far, have held the title for holding the most amount of data, but this latest offering from Toshiba — if approved — gives HD DVD a leg up on the competition. By implementing not one, not two, but three layers on a single disc, the new HD DVD is capable of storing 50 gigs of high resolution goodness, marginally beating out the 50GB on a standard Blu-ray.

I’d be interested to hear how the math worked out for this, considering a single layer HD DVD is 15GB, whereas a dual-layer disc is 30GB. This would lead me to think that each layer is “worth” 15 gigs, so wouldn’t a triple-layer version be 45GB and not 51GB? Where did that extra six gigs come from? Well, it turns out that Toshiba managed to up the individual layer capacity to 17GB on this new disc, but the problem is that no current HD DVD player can read the darn thing.

Regardless, HD DVD supporters are saying that the regular dual-layer disc is “plenty” for a 1080p movie with “a stack of extras.”