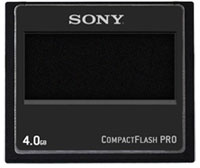 I know, I’m pretty surprised too. Sony, a company best known for producing propriety formats of all kinds, is actually expanding beyond their Memory Stick family of memory cards, taking a venture into the CompactFlash market with a few cards of their own.

They are initially targeting the Digital SLR market, offering capacities as beefy as 4GB (the smallest they’ll be making, apparently, is 1GB). What’s more, the transfer speeds on these Sony-branded CompactFlash Type I cards will be right in line with what’s already available, promising data rates of 66x and 133x.

No word on pricing, but we’re expecting Sony CompactFlash memory cards to start shipping later this Spring. If they keep this up, maybe they’ll move beyond ATRAC, MiniDiscs, and — gasp — maybe even beyond Blu-ray.