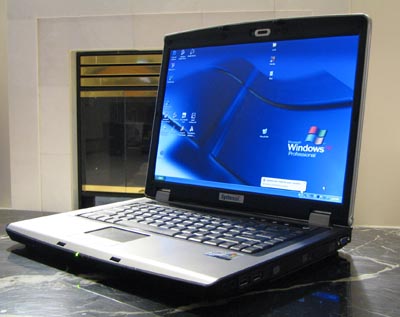 When it comes to selecting a laptop, you have a lot of options to choose from. Some people will want MacBooks, others will want Dells, Toshibas, or HPs. You may not have ever heard of Systemax prior to this review, but the Pursuit 4155 RTS Notebook can easily hold its own against many of the big boys in the industry. Keep on reading to find out why.

Before we get started though, you may be interested to hear a bit of company history. Systemax was established in 1995 and is headquartered in Port Washington, New York. They specialize in computer hardware, particularly personal computers, laptops, and “computer related and industrial products.” To my knowledge, they don’t have any real in-house developed products, rather packaging OEM items (i.e., “stock hardware”) into neat and comfortable packages like this laptop (which I am using to write up the review).

Systamax has agreements with a wide range of component makers, including AMD, Intel, ATI, BFG (GeForce), BioStar and Creative Labs. You may best know Systemax from one of their major subsidiaries/divisions: Tiger Direct.

Anyways, on with the review.

Most of the above mentioned features can be customized, like beefing up the RAM, processor, hard drive and so on. Moreover, the unit that I received came equipped with an integrated webcam and mic (located just above the display), and there are options to add stuff like a biometric fingerprint reader, third mouse button, and other notable goodies (maybe Bluetooth, I’m not sure).

Systemax didn’t try very hard to set this laptop apart from the competition based on looks alone. It uses a fairly standard paint job with matte silver on the top lid, matte black on the underside. That’s not necessarily a bad thing (but it’s not necessarily a good thing either). I am impressed by the construction in general: it’s pretty solid with no sense of flimsiness, and the main hinge appears to be pretty strong, though it’s unclear how well it’ll hold up in the long run. As it is a 15.4-inch lappy, it’s far from being the lightest, but hey, that’s to be expected.

Unlike many other laptops, though, the main indicator lights are not above the keyboard, but rather underneath the mouse pad at the front side of the notebook. Also at the front are an integrated SD card reader, a WiFi switch (save some battery by turning off the radio when you’re not needing the internet), and what appears to be an infrared receiver (perhaps for Media Center remotes?).

What really struck me, and in a bad way, is that the keyboard is very noisy. It’s makes an awfully loud “clacking” sound with each and every key stroke. In this way, the keyboard feels cheaply built and a little flimsy to be honest. By comparison, I’m perfectly happy with the QWERTYness of most other notebooks I’ve used in the past, like the Dell Inspiron 600m, Dell Inspiron 1501, and Compaq Presario 700. Yeah, pretty annoying (even while I type this). I also had issues with the two shift keys, and I had many instances where letters were not capitalized when I wanted them to be. I have no problems with other keyboards, both desktop and laptop.

In an increasing trend among all electronics, the Systemax laptop came with virtually no documentation other than one-pager on how to care for my laptop battery (perhaps due to the whole recall fiasco). Instead, the user manual is a PDF file on the desktop. Saving a few trees, I guess.

Above the keyboard you’ll find a glossy black panel that hides several indicator lights. The caps lock, num lock, and scroll lock lights are hidden underneath this panel, glowing through when on and invisible when off. Also along this glossy panel are four shortcut buttons for quick access to email, internet, and two user-defined functions. The larger power button is on the far right.

Maybe it’s just a matter of personal preference, but I like have the Delete button as the uppermost and right-most button. Here it is on the top row, but it is the second key in from the right (the Pause/Break key takes the corner spot). No big deal, I guess, but something I thought was worth mentioning. You’ll also find a “Function” key so that all the function buttons (F1, F2, etc.) can take on a secondary function each, like increasing the brightness, lowering the volume, and so on.

I can appreciate how Systemax decided to put the USB ports on both sides of the laptop, with one port on the left and two on the right. A little extra versatility goes a long way. Everything else — VGA, S-Video, Ethernet, etc. — is pretty standard. What was a little confusing, however, were the two audio jacks on the right hand side. One is for a mic and the other is for headphones, which would fine if they were more clearly marked. The icon is black, but so is the background. I guess you’d remember after using the laptop for a while though.

This was my first experience with a Core 2 Duo laptop, so perhaps my impressions are a little skewed. In any case, I am quite happy with how quickly things sped along. Windows loads up (and shuts down) quickly, and it the 1.66GHz processor can very easily handle multiple applications. I tried running several Firefox tabs, PhotoShop, Windows Messenger, and a few Flash-based games all at the same time and had virtually no slowdown. During the couple of weeks that I toyed with this machine, I only encountered one crash, and I think that was only due to some messed up javascript on a website and not the laptop itself. 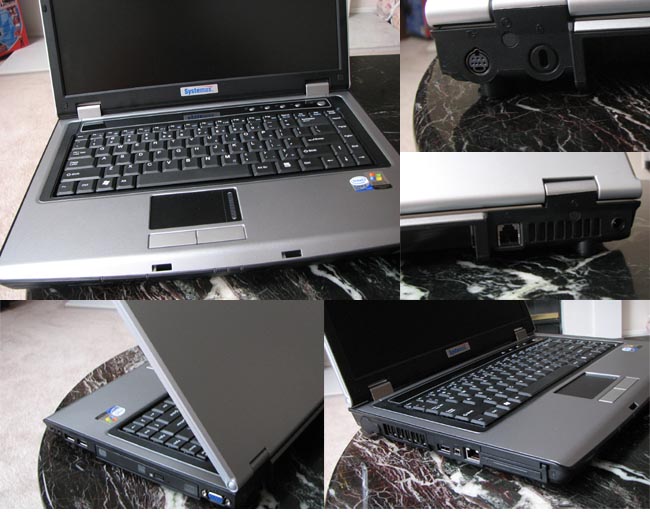 Like so many other laptops these days, the mouse pad also has a built-in scroller. It takes up a fairly good portion of the pad (though you can adjust this), but some may complain that there is no horizontal scroller included. Then again, there aren’t that many instances where you’ll need to see anything much wider than 1280 pixels anyways (nothing in terms of websites anyways).

The full gig of RAM keeps everything moving along at a very decent pace. Coupled with the Core 2 Duo from Intel, the Pursuit 4155 RTS was faster than my Dell 1501 (which is powered by an AMD Turion 64 X2). Overall, I’m quite happy with its processing ability.

I would have liked some sort of word processing program other than Notepad and Wordpad (they suck pretty bad), but I’m assuming that additional software is some sort of option from Systemax. As such, there’s no Excel, no PowerPoint, or anything like that. There is Internet Explorer and Outlook Express, though. Other software that comes pre-installed include eTrust antivirus, Cyberlink (a suite of DVD editing and burning applications), and Phoenix Recovery. I had some trouble using the included Intel PROSet Wireless application for WiFi management (it found my router, but couldn’t connect to it for whatever reason, not recognizing the password or something), so I just disabled it and used Windows to handle my wireless networking.

HDTune simply reports the speed and health of a computers hard drive.

We used the benchmark application Super Pi to test the processor speed, it took PI 1 minute and 30 seconds to calculate 2 million digits of accuracy.

Worth Your Time and Money?

In the end, I’m not really sure how I feel about this Systemax laptop. On the one side, I enjoy the integrated webcam, speedy processor, and bright widescreen display, but the noisy keyboard can get annoying very quickly, and that’s something that’s difficult to ignore. Battery life isn’t the best — about 2.5 hours with WiFi on and various programs running — but it’s not the worst either.

For the asking price — just a touch under $1,000 — you have many other Core 2 Duo options out there to consider, and from names that are better known and better established. This laptop is a decent value, but they really need to fix this keyboard. The mouse buttons are pretty ugly too.