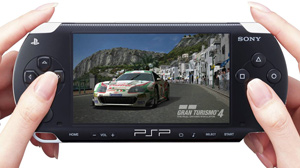 The PlayStation Portable is my first Sony video game system — I never owned the first PlayStation or the PS2, and I have no intention to buy the PS3, at least any time soon — so I still have a lot of catching up to do when it comes to some of their key franchises, like SOCOM, Grand Theft Auto, and so forth. Looking up and down the upcoming releases for the PSP, there are several titles that piqued my interest. Here are just a few.

Capcom Puzzle World (February 6): I love old school and I really like puzzle games. One of my all-time favorites is Super Puzzle Fighter II (I still play the GBA version on my Nintendo DS), so imagine how happy I was to see this fun compilation coming down the chute. I’m already enjoying Capcom Classics Collection Reloaded with Street Fighter II, so why not add in some of the publisher’s best puzzle games too? In addition to Puzzle Fighter (with bonus features), this collection also contains Block Block and Buster Bros. Collection.

Gran Turismo 4 Mobile (Q1): Like I said, the PSP is my first Sony machine, so I missed out on the whole Gran Turismo phenomenon. Sure, I got to play GT4 at my buddy’s house from time to time, but I never got to really enjoy the game you’re supposed to, with collecting cars and upgrading their performance. Sure, GT4:Mobile is probably little more than a port, but it’s a port that PSP owners have been anticipating for a very long time.

300: March Into Glory (TBA): I saw Sin City. I loved it. I heard about Frank Miller’s 300 being turned into a movie. I was enthralled. I saw the trailer and I was blown away. This flick is going to kick some serious ass, so I sincerely hope that they do a good job with the video game. Based on what I’ve seen (trailer below), the in-game graphics aren’t quite as stylized as the movie, which is a disappointment, but it should still be fun.

Devil May Cry PSP TBA: There isn’t much information floating around regarding this rendition of one of the most popular franchises to ever hit Sony’s library. My experience with Devil May Cry is a little limited — I had a short half hour session or so at my friend’s house — but it looks like an absolute blast to play. Let’s hope they actually follow through with this.