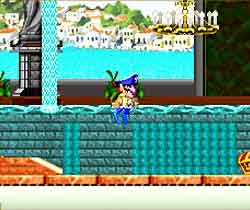 I personally own both a Nintendo DS Lite and a Sony PSP, and truth be told, I play with the former much much more than I do the latter. Maybe it’s the Nintendo fanboy in me coming through, but I’ve always enjoyed the innovative gameplay and colorful characters. Games should be fun, first and foremost, so here are a few Nintendo DS titles scheduled to come out in 2007 that I anticipate will be occupying a fair chunk of my time when and if I purchase them.

Diddy Kong Racing DS (February 5): I enjoy simulation racing games as much as the next guy, but it doesn’t get much more fun on this portable game machine than Mario Kart DS. I fully expect this monkey-ified version to be just as much fun, but with a few character changes. Donkey Kong should be around for the dual appearance, and who doesn’t enjoy hurling banana peels as that overgrown ape?

Wario: Master of Disguise (March 5): I’m-a-Wario, I’m-a-gonna win! Wario has been a fan favorite ever since his original introduction several years ago. In this action platformer, gamers take control of the pudgy anti-hero in a fairly unique way. You use the directional pad in all four directions, but the rest of the controls are dictated by the touchscreen. Sort of like Star Fox Command, I guess.

TMNT (March 13): Okay, this isn’t going to be for everyone. Yes, it’s that nostalgia kicking in for me again, as I think back to those great ninja turtle arcade games of the early 90s. I don’t know how good the new CG movie is going to be, and I haven’t been particularly impressed with the latest generation of shell shocking action, but somehow I still want to play this game.

Black & White Creatures (TBA): I’m not sure if this game will ever come to pass, considering that the original release date announced was “TBA 2006.” I’m not interested in this particular game, per se, as I am in seeing more strategy-based games hit the Nintendo DS. Don’t you think that it would be great to see ports of such popular franchises as Command & Conquer, Warcraft, and Civilization? Black & White on the PC was pretty fun too.