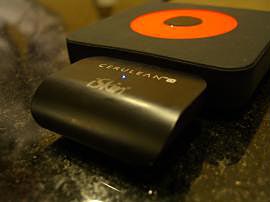 I can get pretty lazy sometimes, especially when I’m just hanging out in my living room, watching some TV or listening to some tunes. Who can be bothered to actually get up from their seat to change the song playing from that iPod speaker dock? This certainly isn’t the first solution of its kind, but it is another option for those of us who prefer parking our rear ends on the couch and never moving again. iSkin has just announced their new Cerulean RX+TX Bluetooth adapter for iPods.

As its name implies, there are two parts to this package. The TX part of things (transfer?) plugs itself into the bottom of your iPod, whereas the RX chunk (receiver?) goes where your Apple would go if it were to sit in its speaker dock. The two are paired via Bluetooth, the music starts blasting out of the speakers, and you control it all using that familiar click wheel interface on your iPod. Yup, the iPod essentially becomes a Bluetooth remote.

Boasting a supposed range of 100 meters and offering support for Cerulean-enabled phones as well, the RX+TX Bluetooth from iSkin will retail for about $130 when it ships in March.