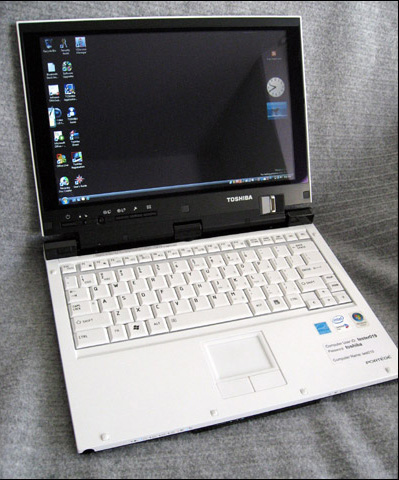 Forging ahead with its UWB strategy, Toshiba took the wraps off a docking station that uses the vaunted UWB technology, while also providing a host of ports for all manner of other connections.

The PC used in the demonstration was the R400-S4931, also called the Protege. The combination takes advantage of the new UWB technology to transfer data wirelessly between the tablet and another computer. All you need to do is hook up the R400 to the docking station using a USB connection, click the mouse a couple times, and then unhook. The virtual desktop remains on the tablet, which can become portable yet still access everything else that’s hooked up to the docking station. In this case, that’s four USB ports, an Ethernet port, an audio out jack, and a VGA out connector.

The desired range for wireless connectivity is about 3 feet, which is certainly enough to free you from being chained to a desk but not enough to let you, say, sit in the next room. That kind of functionality will come with time, of course.

The docking station, which has been designed to work only with the Protege, is expected to be available this spring, by which time it will no doubt be compatible with other Toshiba tablets and laptops.