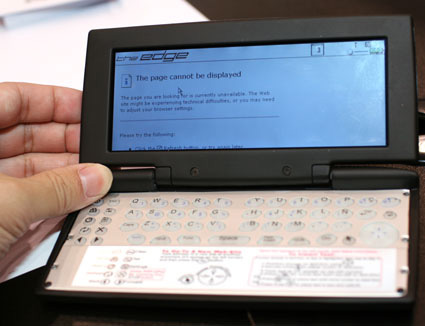 Somewhere between a fully compatible 12-inch notebook and a smartphone, resides The Edge. In this case, its not the U2 guitarist, but rather an Internet machine from Edgetech International who say that their product gives you wireless surfing all the time, anywhere.

The keyboard is straightforward, with most of the keys exactly where you’d expect them, and some of the most used keys off to one side, which should be fine once you get accustomed to it. The screen is a bit on the small side, but it is widescreen and this is not a laptop, after all. Voice activation is apparently the name of the game for certain functions as well. It looks to be as a corporate navigational device, rather then your glamorous multimedia wonder, since it does support email over a 128 bit encrypted network.

On paper the device looks kind of interesting – access the net on the go, open email attachments like PDF’s and Microsoft Office documents. The machine is claimed to be able to access any webpage within five to seven seconds, and it is not carrier specific. IM, computer remote control and email over a 128 bit encrypted network, not bad.

The price is rather nice, at just US$200, although you’ll be plunking down an extra US$50 a month for that wireless Internet, which is not tied to any one provider.