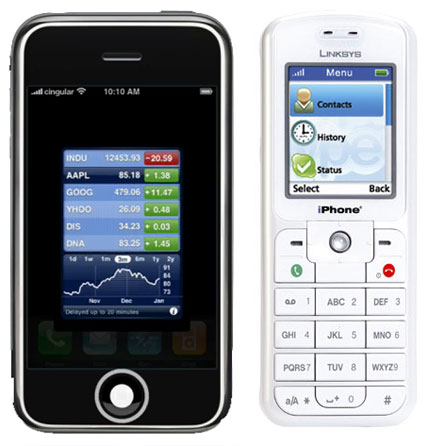 Apparently that agreement was never reached and it was just wishful thinking on Cisco’s part. Cisco is suing Apple over the use of the iPhone moniker, but the produce-inspired iPod-maker is flat out denying that they made any kind of deal with Cisco. In this way, they were no were close to a “settlement.”

Apple is saying that Cisco’s claim to the iPhone name is “tenuous at best”. Spokeswoman Natalie Kerris went on to say that “there are already several companies using the iPhone name for VoIP products.” And here I thought Cisco, owner of the Linksys, was going to be rolling in the dough too. Instead, they’ll be rolling in litigation and a prolonged court battle.

Interested in making a little money out of this whole brew-ha-ha? Bodog is taking wagers. They ask whether Cisco will win the lawsuit (Yes is a slight favorite at -135 vs. No -105) and whether Apple will be forced to change the iPhone name (No is the overwhelming favorite at -900 vs. Yes +500).