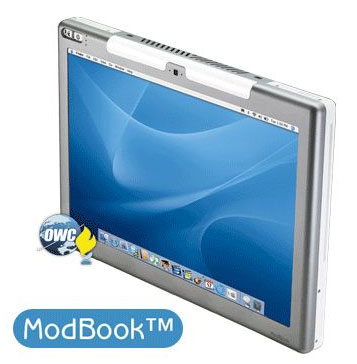 The Mac Tablet has arrived, only it’s not from Apple.

Axiotron is the provider of the ModBook, a Mac OS X-running tablet PC that sports a MacBook’s power and operating system and definitely improves on Windows-running tablets. They basically convert a MacBook to act as a tablet, but its not running on Windows. Among those improvements are the to-Mac-aficionados-familiar iChat, iDVD, and other iLife applications; an optional GPS unit; Bluetooth capability; and handwriting-recognition protocols.

The interesting thing about this ModBook is that Axiotron is headed up by Andreas Haas, who was formerly in Apple’s Newton group. He has said: “If your favorite input device is the pen, this is the Mac for you.” If the iPhone can go keyboardless, why not the ModBook?

Hardware specs include 2GHz Intel Core Duo processors, a 1 13.3-inch widescreen LCD, and a hard drive up to 200GB. Pricing is US$2,199 for the base model and US$2,699 for the most enhanced version. ModBooks are in stock now.