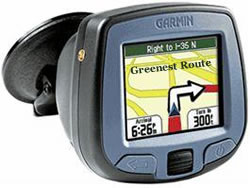 It’s GPS Meets the Eco-challenge. In this case, however, we’re not talking about any sort of adventure racing. Rather, the eco-challenge is finding the “greenest” route from Point A to Point B.

Since driving in a straight line is rarely possible (and hasn’t really been done since the early century), most satellite navigation systems will opt for either the fastest or the easiest route. A new system for SatNav devices goes for the route which uses the least amount of petroleum for your vehicle.

It’s the brainchild of the Lund Institute of Technology, who have crunched a lot of numbers in their quest to respect the environment by pumping fewer carbon emissions into it. Test runs of this impressive-sounding protocol have cut gasoline consumption by an average of 8.2 percent.

That number—and, indeed, the whole lot of the testing—are dependent on such things as street quality and traffic flow, both of which can play havoc with the most well-intentioned directions. Still, it’s an option that is not only worth talking about because of its dedication to saving the environment one commute at a time, but also because of what could be the vanguard of a revolution in satellite navigation.