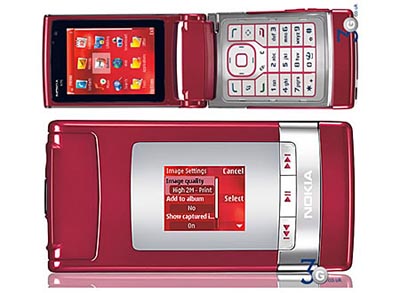 Nokia isn’t particularly well known for making skinny cell phones, but if the N76 that they just announced at CES is any indication, they should keep making them. After all, it’s not only fashionable with its bold red paintjob (surely, they’ll offer it in different colors for the more masculine crowd), but it’s a multimedia powerhouse too.

The external controls work great with the large external display (which can be used in landscape orientation), giving you quick access to all sorts of musical content. Flip open this slim clamshell and you’ll discover a good-sized 2.4-inch 16 million color display (which also can used in landscape). Internet-ing comes by way of the Nokia Web Browser, pictures from the 2.0 megapixel camera, and editing with the bundled Adobe Photoshop Album Starter Edition.

It probably doesn’t have all that much internal memory, but that’s not a problem as it can swallow cards as large as 2GB. Estimates have the street price at $500 when the Nokia N76 ships sometime during Q1 2007.