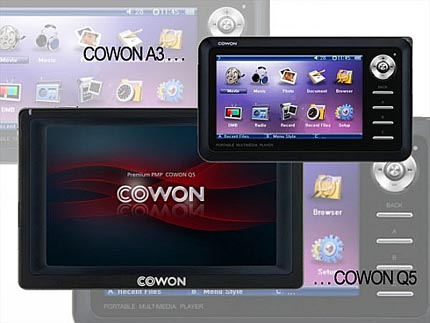 Apple may own a very significant portion of the MP3 player market, but they still haven’t handled video quite as well as some other manufacturers (maybe the iPhone will change that with its larger display). Cowon has always featured prominently in the world of PMPs and they took the opportunity at CES 2007 to announce a couple of new additions, including one unit with a huge five-inch color screen.

The Cowon A3 is a fairly mild upgrade to the Cowon A2 we saw over a year ago. It appears to have the same four-inch screen, FM radio, stereo speakers, and so forth, but this time around they included DMB features. The real story today, however, is the all new Q5. Despite being “a player of regular size”, this PMP is rocking a 5-inch display that covers the entire front. What’s more, the Q5 has also got DMB and HSDPA.

No official press release yet, and as such, no official specifications have been released.