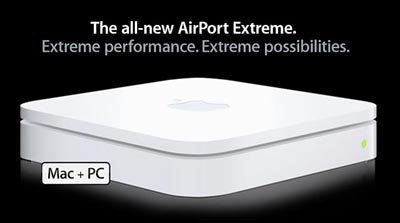 The keynote speech by his royal Steveness was quite the event with the official announcement of the iPhone and all, but that wasn’t the only cool product to come out of Macworld. Apple also announced a revitalized AirPort Extreme, a glossy white number boasting 802.11n, providing “the perfect wireless solution for home, school, and business.”

But wait, isn’t it just a router? Sort of. In the same way that the iPod is just a MP3 player and the iPhone is just a cell phone. Right. Exactly.

By offering 802.11n, this new AirPort Extreme offers up to five times the speed of its predecessor, all while keeping your networked computers, printers, and USB hard drives seamlessly connected. It’s also got MIMO (Multiple In Multiple Out) smart antennas, backwards compatibility with 802.11b/g devices, dual band antennas for 2.4GHz and 5GHz frequencies, and a built-in NAT firewall.

The new AirPort Extreme Base Station will retail for $179 when it ships next month.