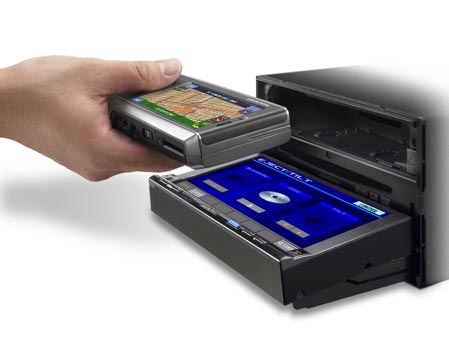 Press one button, and you discover the hidden GPS unit in the latest Alpine dash entertainment suite. The folks at CES were so wowed by the hideaway qualities of the Alpine IVA-W205’s GPS slot that they gave it a Best of Innovators award.

First, though, we have that IVA-W205, which sports a boatload of features, including real-time traffic, AM/FM and satellite radio, DVD and iPod integration, MP3 and WMA capability, Bluetooth functionality, and adapter-free hands-free calling.

The hidden nav is the Blackbird PBD-P200, a full-blown GPS unit that can be plugged in to work with your car’s navigation system, or taken out for trekking around town to find all those POIs.

– XM Mini-Tuner Enabled: Use a new 2007 Ai-NET head unit to play and control portable devices that use XM’s new Mini-Tuner platform. The XM Mini-Tuner is a tiny cartridge that contains the XM chipset, making it possible for subscribers to take their XM subscription from one XM compatible device to another, including from home to car. Separate Mini-Tuner car dock and Smart Digital Adapter for Alpine head units required, sold separately.

We know that the W205 will be available in April for US$899. The Blackbird will come a bit later, but we don’t know when or for how much. What the package deal will cost is also undetermined.