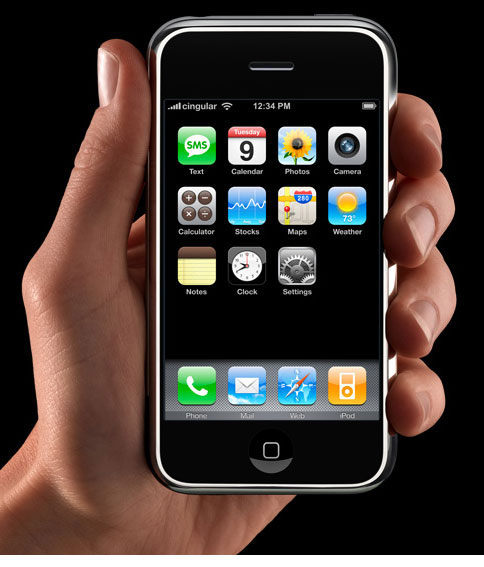 I’m not sure how they can still use the iPhone moniker, given that Linksys already released a family of products under that name, but however they managed to do it, they did.

Steve Jobs took the stage at MacWorld in San Francisco, a hush fell over the crowd, and then he did it: Apple has announced the iPhone, a “revolutionary mobile phone.” It has a whole bunch of stuff that we expected, including a widescreen display (when held on its side) and the absense of a physical click wheel. In fact, the 3.5-inch screen is a multi-touch display.

For the SMS fanatics in the audience, you’ll be glad to hear that there is a full QWERTY soft keyboard here, which is “predictive to prevent and correct mistakes, making it much easier and more efficient to use than the small plastic keyboards on many smartphones.” Other goodies include a 2 megapixel camera, a photo management application, quad-band GSM radios with EDGE, WiFi, Bluetooth 2.0 EDR, a rich HTML email client, Safari web browser, Google maps, an accelerometer, proximity sensor, and an ambient light sensor.

The Apple iPhone will be available though Cingular in the United States in June 2007. The 4GB and 8GB models will sell for $499 and $599, respectively. The European launch is planned for late 2007, whereas the Asian release is scheduled for 2008.

Did you bet on this announcement? Maybe you should have.

Old iPhones
Here are some iPhone concepts from the past that we can now all laugh at; 2.2-inch touchscreen model, ROKR clone, expanding thumbboard, another slider, and of course the horrendous flip monster.