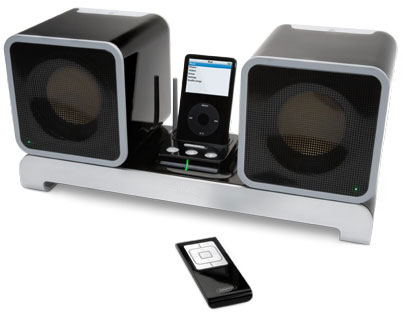 When people talk about iPod speaker docks and then the term “wireless” comes up, you assume that it comes with some sort of wireless remote, right? Well, with the Evolve wireless sound system from Griffin Technology, they take the idea of being wireless to “the next stage” by cutting the cables to the speakers. The two cube-shaped speakers can easily be detached from the main docking station, allowing you to blast out the sound from just about anywhere, including the next room.

Obviously, it won’t be able to do this for hours on end — each speaker lasts for about ten hours between charges — but when it comes time to top up the speaker’s batteries, you don’t even need to plug them in. Simply place the speaker in its docking spot and it’ll top itself up. Each sound producer also has its own on/off switch.

And yes, it has a RF remote too. Mmm… wireless. No word on pricing, but the Griffin site says that the Evolve is “coming soon.”