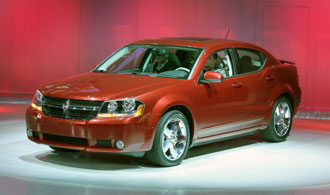 The Dodge Avenger. A compact offering that is said to “pack a powerful punch” and offering a little more of a “grab life by the horns” mentality than its tamer Sebring cousin. The 2008 Avenger was officially unveiled at the Detroit Auto Show, and it doesn’t look all that different than the 2007 Avenger R/T spy shots we saw a few months back.

They haven’t quite transformed it into a Mini Magnum yet, but the new Avenger does pull several styling cues from the Charger. There will be four different models under the Avenger banner: SE, SXT, R/T, and R/T AWD (yes, all-wheel-drive).