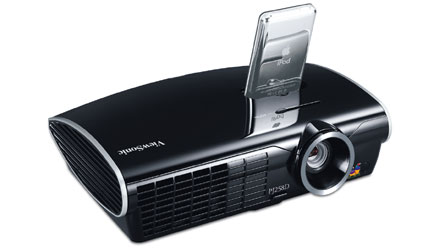 ViewSonic is continuing its iPod theme with a projector made for the ubiquitous multimedia device. So many of those iPods are now video-capable, and ViewSonic has capitalized on that availability with the DLP PJ258D. Like the ViewDock, it is also an iPod-charging dock.

This projector weighs just four pounds (without the iPod, of course) and is eminently portable, but it sits on the presenting table as well as any other imaging device and does its thing, showing off its 1024×768 resolution, 2,000 lumens of brightness, and 2000:1 contrast ratio by broadcasting whatever TV show or movie you happen to have queued up for display.

You can, of course, use the projector as an interface with other video sources. The ports include VGA, compositie, and S-video.

Want one? You’ll have to a wait a bit, since the company expects to have it mass-produced before summer begins. You can expect to pay US$999.