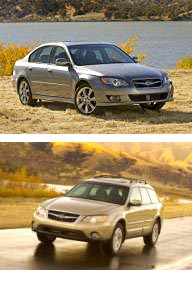 Sure, all those flashy looking concept cars — especially those that are either very environmentally-friendly or very gas-guzzlingly powerful — may get a lot of the press in Detroit this week, but you won’t be driving them any time soon (if ever). Bringing things down to Earth yet stepping up just a notch are a pair of 2008 redesigned vehicles from Subaru: the Legacy 3.0R Sedan and the Outback 3.0 LL Bean Edition.

I’ve always been a fan of the STi, which shares many components with the everyday Impreza, which in turn shares some architecture with the Legacy. The new Legacy 3.0R sedan is going to be their flagship sedan, as it is the first North America-bound Legacy with a 6-cylinder engine. Naturally, it comes with Subie’s signature All-Wheel-Drive. Other key features include paddle shifters, 18-inch wheels, and a Bilstein Sport Suspension.

You’ll notice that on both vehicles, they have not opted for the “pig-nose” fascia, going instead with a new grille that features “chrome crossbars and a central Subaru logo that represents the company’s aeronautical heritage.” Or maybe it’s just a response to the bad press the old grille got. As far as what’s so special about the LL Bean Edition Outback, the press release doesn’t even mention it beyond the title.