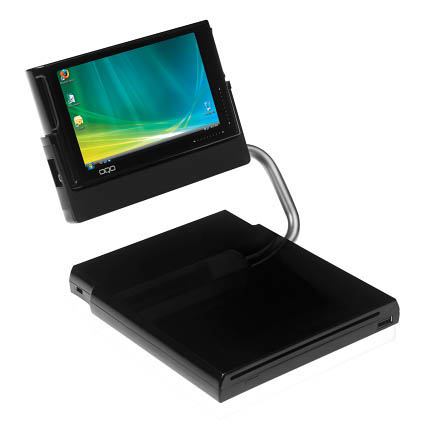 If you’re going to update something, you might as well make the new version a conversation-starter. That’s what OQO has done with its 02 UMPC, which features a wow-factor dock, giving it more than enough legs to stand on in the burgeoning UMPC competition.

That dock is where the desktop-like power resides: a CD-RW and DVD-ROM drive with an optional DVD burner, an HDMI-DVI adapter, and ports to meet diverse needs, including VGA, Ethernet, audio, HDMI, and three of the USB 2.0 variety.

Your processor choice is 1.2 or 1.5 GHz. The hard drive is a somewhat impressive 30GB, and the RAM is a somewhat paltry 512MB. That’s the base model. The second model in the line doubles those numbers. Both models have the by-now essential Bluetooth and Wi-Fi tech.

Battery life is targeted at just six hours, which might be a turnoff for some. Pricing is US$1500 and US$1850, respectively. One big thing to note: The dock comes standard only with the 1.5 GHz model. If first looks are anything to go by, that extra US$350 is worth it since you are laying down so much cash to begin with.