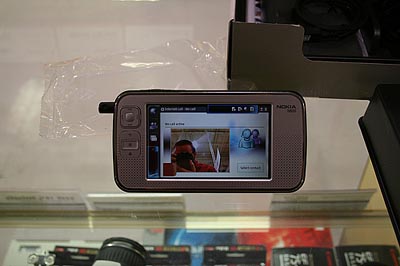 Well, that was a little strange. It seems that Nokia started shipping their new N800 Internet Tablet a couple days before they even announced the bloody thing. The Linux-based device is the successor to the Nokia 770, and you can apparently waltz on over to CompUSA’s Chicago “superstore” to get one right now. That is, if you want to drop $400 on it.

Bear in mind that it doesn’t appear to have any cellular radios on it whatsoever, opting instead for a strictly WiFi experience. If you think that the N800 looks a little familiar, you may have seen it floating around a couple months ago as the Nokia 870. The rest of those rumors appeared to have held up, though, as you’ll find a VGA camera, dual miniSD slots, stereo speakers, and what appears to be VoIP support.

Anyways, now that CES has kicked off, Nokia has taken the lid off and officially announced the thing.