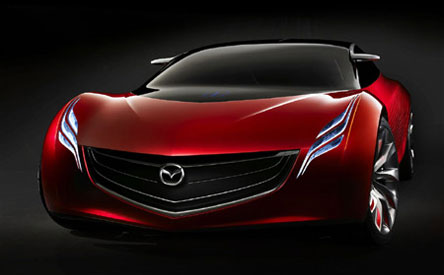 The Detroit Auto Show has got to be the ultimate stage for revealing your latest automotive creation. Mazda has rolled into town with one crazy looking sports car. The Ryuga concept — pronounced “ree-yoo-ga” — appears to have some similarities to the Miata-based Kabura concept we saw at last year’s Detroit show.

From there, they went on to create the Nagara concept, a cutting edge sports car that was unveiled at the LA Auto Show. The Ryuga takes that concept one step further, getting it that much closer to production-ready. According to the press release, the Ryuga (meaning “gracious flow” in Japanese) is prêt-a-porter.

In many ways, the Ryuga could be a spiritual successor to the four-passenger RX-8, except this car is significantly shorter and lower. The front-wheel-drive Ryuga be powered by a 2.5L MZR engine that can run on either conventional gasoline or E85, mated to a six-speed automatic transmission.