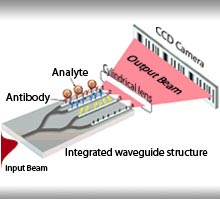 The future of medicine may very well be in your hands.

That would be if you were holding a virus-detecting sensor developed in the Netherlands that can, in a matter of minutes, determine just how much SARS, bird flu, or other kind of deadly virus is in an area. All it needs is a sample of saliva or blood. These kinds of viruses spread so quickly that scientists often find them difficult to identify, let alone track.

The key to the device is a silicon substrate, the waveguides on which split light into four parallel beams that form an interference pattern that gets scattered when viruses bind to antibodies. By analyzing the shift in the interference pattern, the scientists can tell how concentrated the virus is.

The result is a handheld device that can be used in the field, where traditional, more cumbersome devices can’t tread.

The device has shown successful results in testing with the herpes virus so far. Further testing is under way, with researchers hoping that the device can one day find not only SARS and bird flu but both at the same time.