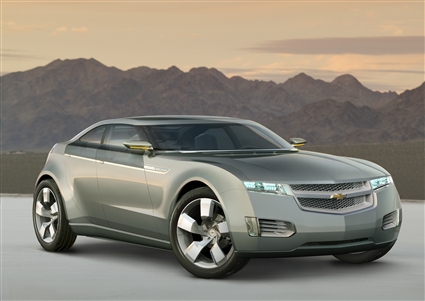 Electricity is definitely in the air at the North American International Auto Show. The titans of industry gathered in Detroit on Sunday for the massive event, and the buzz was more often than not about hybrids, plug-ins and sometimes shocking alternatives to plain old petroleum.

Toyota, poised to become the world leader in automotive sales, announced a target of 300,000 vehicle sales of the environmentally friendly variety, up a full 35 percent from its 2006 totals. Toyota execs were talking Prius, of course, but also Camry and various other plug-in options.

General Motors jumped back into the electric fray with the Volt, a concept car that will get its juice from a next-generation battery pack that recharges itself from the engine. Gas consumption is expected to be minimal, a far cry from the guzzlers that GM and the other members of the Big Three have been known to put out over the years. In fact, GM estimates that you’ll save 500 gallons a year. And yes, the Volt is a plug-in, capable of charging overnight via a standard 110-volt wall outlet for a full head of steam in the morning, capable of taking you 640 miles between stops.

If GM is jumping into the electric game again (after its famous axing of the EV1), then maybe this is a movement that’s not going away. But don’t be fooled, the Volt is no EV1.