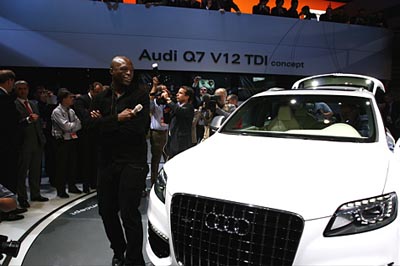 While much of the attention in the tech blogs this week will be dedicated to CES 2007 in Las Vegas, over in Detroit, they have a little bit of star power going their way too. At the North American International Auto Show, Seal — yes, that singer you haven’t heard from in a few years — showed up to promote the new Audi Bluetec TDI Q7, as well as the beefy V12 TDI Q7 concept.

You’ll notice that the sport utes come with the signature trapezoidal grille in the front, but the real story behind both vehicles lies under the hood. The Bluetec will handle the mroe environmentally friendly among us, but people that want a whole lot more “umph” to their ride will surely opt for the Q7 concept boasting the 6.0L V12 TDI motor. Alongside the 500ish horsepower, you’ll also enjoy an incredible 738 lbs-ft of torque (which translates nicely to 1000 Newton-meters). This diesel powerplant was derived from the R10.