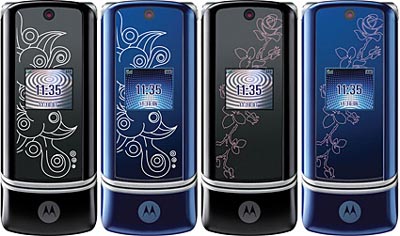 We’ve known for a long while now that having the best specs and features isn’t enough to sell a cell phone. It’s got to be a looker too if you want to attract the attention of the average consumer, even at the expense of cheaping out on a few key functions. Case in point is the MOTOKRZR, which is a small upgrade from the ubiquitous RAZR, except that it now comes in a not-so-wide but oh-so-shiny package.

Turns out that just being shiny isn’t enough either, because we spotted these MOTOKRZRs with some unique etchings on them, and what’s more, they’ve been seen running on T-Mobile’s menu system. Appropriately named “Abstract” and “Rose”, these fancy flip phones will be available in your choice of black or blue.

No confirmation from any party yet, so we’ll just have to stay tuned.