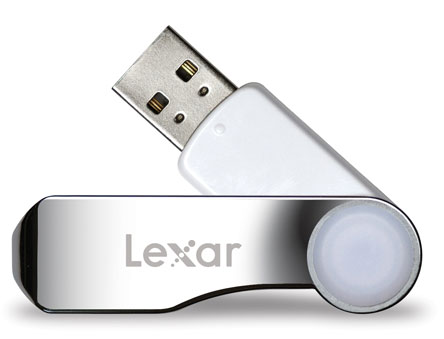 Everyone loves their thumb drives, and Lexar has always featured prominently in that market. That’s why they’ve got three innovative USB flash drives for us at CES 2007 in Las Vegas, including one that sports a capless design.

The Lexar JumpDrive 360 is promising “no more lost caps.” That’s because it doesn’t come with a cap, instead implementing a “tough rotating metal jacket.” It’ll come preloaded with PowerToGo and will ship in 1GB and 2GB variants.

For people who keep forgetting how much space they’ve still got left, the Lexar JumpDrive Mercury has a built-in “capacity meter” that stays functional even when disconnected from a PC. Lexar is now offering it preloaded with Lexar Secure II security software, and existing owners can download the software from their website.

And finally, there’s the JumpDrive Firefly, a drive that is being marketed as “fun and functional”, while helping you not lose the cap (it’s tethered). They’ve currently got capacities as large as 4GB, but an 8-gigger is due for March.