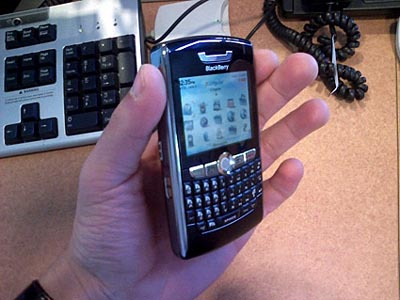 While the BlackBerry Pearl has got to be the most fashionable handset in RIM’s lineup, a big knock on it is that it has that fugly SureType keyboard that isn’t quite up to snuff with hardcore Crackberry users. Apparently, Research in Motion has heard your cries. Spotted among us is a new BlackBerry that comes with all those fashionable cues of the Pearl, except this one’s got a full QWERTY keyboard.

Some have called it the 8800, others the 8900c, but whatever they want to call it, I call it sexy. From what we can gather, the specs and features will read much like its 8100 Pearl cousin, meaning that it’ll rock a microSD expansion slot, 65k color display, 1.3 megapixel camera, and EDGE data. And yes, even that trackball that everyone either loves or hates.

It seems to be a very touchy subject, because shortly after I saw this on HowardForums, the thread was removed for inexplicable reasons.