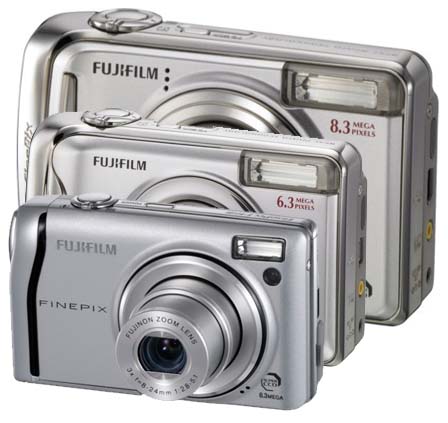 FujiFilm is at it again, pumping out cameras like there’s no tomorrow. The latest suite of FinePix shooters includes three fine models, two 8mp and a 6mper, that will be shown at CES, where you can see for yourself how Fuji has expanded the storage by adding SD to its xD-Picture Card repretoire.

That 6-megapixel job is the A610, an entry-level camera that sports a 2.5-inch LCD and a 3x optical zoom, which is just fine for the US$129 you’ll pay for it when it comes on the market in March.

Further up the food chain are the 8-megapixel models, the F40d and A800, both of which have the same 2.5-inch LCD and 3x optical zoom that the A610 does. The A800 is built on the Super CCD-HR sensor, which explains its slight price bump, to US$179. The F40d has picture stabilization, face detection, and a two-shot mode that alternates flash and no-flash of the same frame. That’s quite a lot of add-ons for just US$120 more than the A800.

Those last two models will also hit the shelves in March.