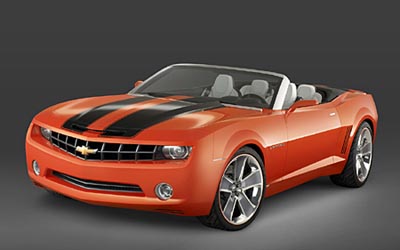 How nice. Chevrolet was nice enough to give us an official glimpse at the Camaro Convertible Concept ahead of schedule, and I have to admit that it is one sexy beast. Set to make its real-life debut at the Detroit Auto Show later this week, the open-air Camaro will be rolling around in a “lovely Hugger Orange pearl tri-coat paint job”, accessorized by some stylish dark gray racing stripes running down the center.

Although it may have the appearance of a weekend cruiser, the Camaro Convertible will surely be able to perform if you decide to take it a rip on the test track. After all, it comes powered by a beefy V8 engine, stops on a dime with its four-wheel disc brakes, and lets you keep connected to the road with its four-wheel independent suspension. And yes, you’ll be able to throw it through the gears on your own with its “proper standard transmission.”

Everything about this car, with the obvious exception of the roof, should be essentially the same as its coupe cousin. A whole bevy of snapshots can be found here.