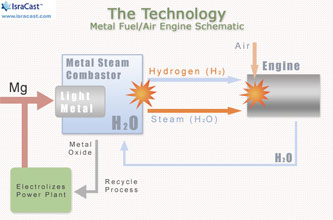 True visionaries think outside the box entirely. If the box is petroleum to power cars, why not get outside the petroleum box altogether?

That’s what Engineuity has done. The Israeli company, which gained notoriety for its zinc-to-hydrogen through solar power system back in 2005, is at it again, this time detailing a system that would power a car using hydrogen and steam that are distilled from reactions between air and water and such finer metals as magnesium or aluminum. The result is a metal oxide that travels from the long coil combustor to the engine and powers the vehicle. Incredibly, the metal oxide not used can be converted back into exactly what the car needs, more fuel. And since air is full of hydrogen, the possibility for on-the-go refueling is there, too. Best of all, no petroleum burned means no emissions whatsoever.

The one drawback seems to be that the long coil needs to be heavier than normal, although the Engineuity scientists say that won’t affect performance, which they judge to be about the same as a petrol-powered car. Other than that, the stumbling blocks seem to be demand and seed money.

This is a work in progress, and the company has no plans for world domination. Rather, they expect to be able to produce detailed systems in the next few years that are designed to replace, not augment, traditional systems.