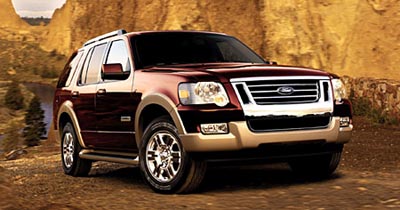 The Explorer is Ford’s big bad people-and-cargo-moving machine, but it seems like they’re ready to tame the beast just a notch. Word is that the next Ford Explorer will not technically be an SUV, but rather a CUV or “crossover”, because it will be constructed using a car-based platform rather than the truck-based one it currently implements.

This next-generation Explorer is said to be built around the same D3 platform as the Five Hundred sedan and a few full size Volvos. In exchange for some lost ruggedness (and maybe some street cred), the new CUV will offer more car-like handling, a lower center of gravity, and — perhaps most important of all — improved fuel economy. This will give the Explorer a little more “mass appeal”, as they say.

Autoblog says that Ford may be overplaying the CUV market, given that they already have the Freestyle, Edge, and the upcoming Fairlane. Or maybe the Fairlane will be rechristened as the new Explorer, who knows.