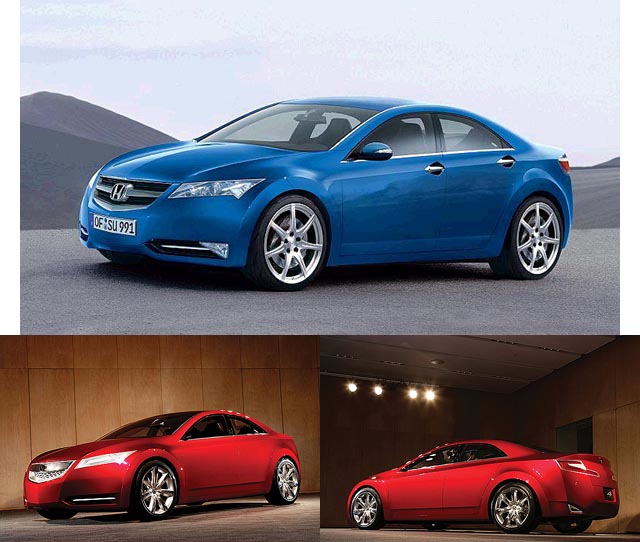 As we prepare for a whole new season of car shows (the North American International Auto Show kicks off in Detroit a little later this month), our sights are set on the vehicle-makers of the world to wow us with novel concepts and groundbreaking innovations. Interestingly, when I look at the site stats for Mobile Magazine for the past couple of months, one post has getting a whole lot of hits, sometimes being the most viewed on any particular day: Is this the 2008 Honda Accord?. In fact, if you search “2008 Accord” in Google, it’s the top result.

So, it got me thinking. Has anything changed since the time that was posted? I did a little investigating, and found a few new renderings of the 2008 Honda Accord. What’s more, these pics are straight from the Honda website. Other than the wheel change (which is pretty easy to do), the first thing that really jumps out at you is that they’ve redone the front fascia. I also get the impression that this most recent image (the blue car below) is not that of the Honda Accord, per se, but rather the next-generation Acura TSX (which currently shares many components with the Accord).

We also hear word that the Honda Integra (known as the Acura RSX around these parts) is on its way out for 07/08, and it will be replaced by a TSX coupe, placing the emphasis more on sporty luxury, rather than performance with some niceties. There’s four doors on the Honda Sport4 (TSX/Accord) concept — pictured in orange below — but it very much has a coupe-like feel to it. It might even have Honda’s SH-4WD system.

Well, if they want it as an ’08 model, Honda will be officially unveiling the new Accord (and/or TSX) some time this year. Stay tuned.

Update 1/8/07: The 2008 Honda Accord has been unveiled at the Detroit auto show, jump over for photos and discussion.