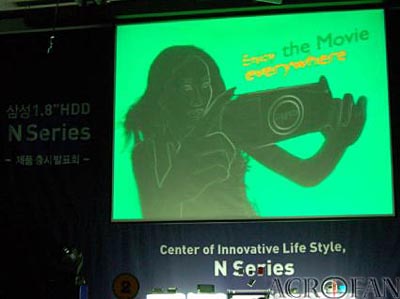 Just as the Nintendo DS gave way to the new and improved DS Lite, the Sony PSP too is due for some sort of upgrade. It may be hard to believe, but the UMD-rocking handheld has been out for almost two years now. We’ve heard rumors about GPS and an integrated webcam, but for the latest iteration, the most interesting rumor has been that of a hard drive.

Well, in a recent presentation by Samsung, the Korean manufacturer announced a new-generation 1.8-inch hard drive and one of the major examples for implementation they provided was that of the Sony PSP. What’s more, this little spinny disk of storage is said to contain up to 60 gigs of data, much more than the 2GB, 4GB, or even 8GB Memory Stick Duos on the market. That’s a lot of music and vids.

These new N-Series Samsung drives may also be found elsewhere — other portable media players, ultramobile PCs, etc. — but can you imagine if they plopped one in a PSP(2)?