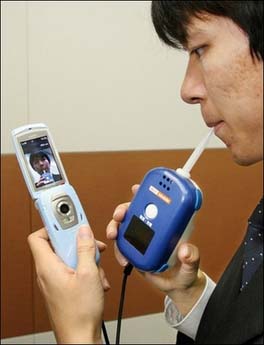 There’s drinking and there’s driving, and you’d better not do both. Unfortunately, ’tis the season for doing exactly that. KDDI, one of Japan’s powerhouse mobile phone companies, has come out with a partial solution.

Actually, it’s a full solution for a large part of the population. We’re talking about bus and taxi drivers, which make up quite a bit of the driving public in Japan, one of the most densely populated countries on the planet. The solution is a mobile phone breathalyzer that can check your intoxication level and send your mugshot and GPS location straight to your boss if you fail the test.

It’s called Alc-Mobile, and it costs US$1,250, but that hasn’t stopped bus and taxi companies from buying it with serious intent. Four hundred sets have been sold already.

The system is part of Japan’s tougher stand against drunk driving accidents, which numbered nearly 14,000 in 2005. Bus and taxi companies previously had devices that would check drivers’ blood alcohol level at the station, but the Alc-Mobile allows monitoring on the go.