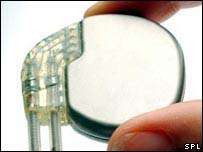 Pacemakers are great tools, lifesavers really. They help regulate heartbeats for millions of people. They also require regular maintenance of the most mundane variety: changing the battery. If a group of researchers out of the U.K. have their way, however, the battery-powered pacemaker will be a thing of the past.

The Department of Trade and Industry is among the backers of this effort, which would replace the current batteries with a micro-generator that would get its juice from a person’s own movements. That kind of device fits with the researchers’ quest for a “fit and forget” strategy for such powerful medical needs.

It’s not clear yet how much movement you’ll have to make to power that pacemaker or whether it will, like solar panels, store energy from your daily movements in order to power your heart when you’re sleeping. The idea is still on the laboratory table, so we don’t have such details. We do have a limited prototype photo, though, which shows a very small device.

It’s not the only battery alternative, however. Other teams are hard at work on other ideas, including heat-powered generators and nebulously described “biological pacemakers” that will derive power from the body in some other way.

Whichever of these ideas makes it to market first, it will undoubtedly be the last word on keeping the heart going strong. These kinds of products will certainly eliminate many surgeries, but doctors will likely agree with their patients that that’s a tradeoff worth taking.