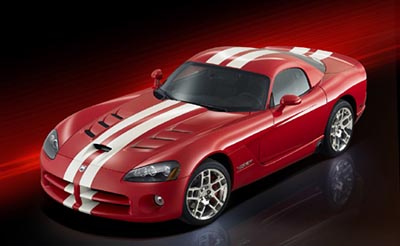 You want American muscle? We’ve got the American muscle. Dodge was nice enough to unveil their 2008 Viper SRT-10 ahead of schedule, breaking cover well before the Detroit Auto Show next month. This is one of the most monstrous vehicles on the market, boasting a V10 motor with a solid 8.4 liters of displacement (up from the previously reported 8.3 liters). This powerplant is good for 600hp and 560 lbs-ft of torque, which, as you know, is barely enough to get the grocery store and back, right?

The U.S.-based McLaren Performance Technologies helped Dodge develop this incredible engine, but many are saying that there are plenty more horses to be coaxed out of the huge 8.4L beast under the hood. Speaking of the hood, they have redesigned that part of the car as well, tossing in six vents to help dissipate the heat.

This new Viper SRT-10 really goes like stink, doing the 0-60mph in the mid to high 3-second range, but those huge brakes certainly do their job as well, bringing it all back to a standstill in less than 100ft. Color choices include Snakeskin Green, Viper Violet, Viper Orange, Bright Blue, and — my personal favorite — Venom Red.