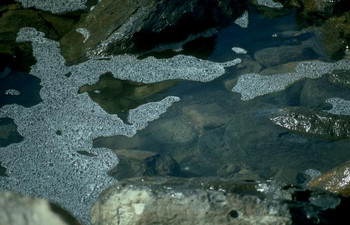 OK, let’s get the collective ooooohhhh out of the way so we can get on with this discussion.

Now, let’s talk about scum. It seems that serious discussions are taking place about using algae as biomass for an alternative form of energy. One of the most prevalent forms of life on the planet can be taken by us humans and converted into fuel for our polluting efforts.

Algae has an amazing ability to crank out organic substances from inorganic fuel and, more importantly, the best fuel for that algae is greenhouse gases. That might create an odd sort of paradigm, wherein the poisonous emissions of familiar fuel-producing plants are funneled into reactors that produce fuel sources to replace the very things that power those reactors. But scientists are actually talking about using pond scum to produce alternative fuel for automobiles, power plants, and much more.

Biomass is the red-hot commodity among alternative fuel discussions these days. Food crops like corn and soybeans are being harvested at record levels to create alternative fuels. Even OJ is gettin in the mix. The level of that harvesting worries some agriculture officials, who would have absolutely no concerns about the ready supply or palatability of algae as a source of ethanol or biodiesel.

Proponents of pond scum as fuel source are revving up their marketing campaign, and it’s likely we’ll hear more about this in the coming years. In the meantime, don’t worry. It’s not like you to have eat any of it.