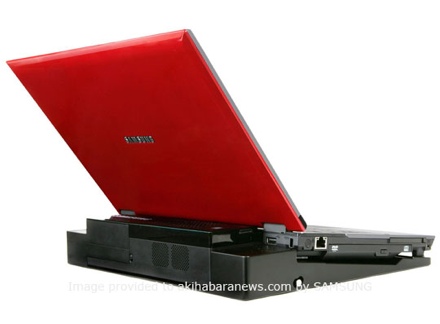 Not waiting around for those Matsushita replacement batteries, Samsung is moving full steam ahead down the fuel cell highway, with a notebook dock that can give you a full month’s worth of power. That’s a lot of time between charges, which is a good thing for today’s ultimately portable society.

The noise level of the fuel cell is nothing more than a gentle hum, which is what you would expect from a notebook power source anyway. This is a significant improvement and pairs with the impressive leap in density to provide a big step forward in avoiding exploding batteries altogether.

The fuel cell itself is of the Direct Methanol variety (or DMFC, for the acronym lovers among us). And that’s a Q35 in the photo, meaning that you won’t have to buy a super-tiny notebook just to be able to use this fuel cell dock.

We can expect to see this product in full force by the end of 2007. It should still be ahead of its time.