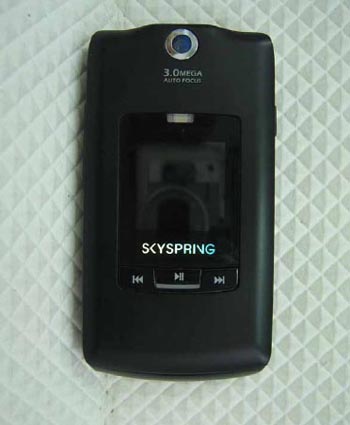 Well, look what we found waltzing around at the ol’ FCC office. Skyspring has beat Motorola to the punch, developing a RAZR-like clamshell that comes with a high-resolution 3.0 megapixel camera, complete with autofocus. Based on the media controls on the outside, you have to assume that the SP-770 (as it is apparently known) also boasts music playback.

From the side, you can see that there is a mini-USB connector — not unlike the RAZR — as well as a microSD expansion slot to stash all those high-res photos you’ll be taking. The tri-band GSM (850/1800/1900) handset also rocks Java games, a Health feature (for BMI and menstrual cycle monitoring), melody composer, video recorder, picture editor, sound recorder, Bluetooth, and WAP.

What’s a little off-putting, however, is that the user manual mentions a VGA camera rather than a 3 megapixel one, though the latter features quite prominently on the face of the phone. Maybe they just need to update the manual.

In any case, the Skyspring SP-770 is FCC approved, so it should be available sometime soon, though probably not directly through a network operator.