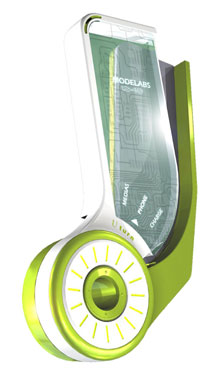 They don’t really look like conventional cell phones, but they shouldn’t. This is some groundbreaking stuff here, folks, so it only makes sense that they depart from the standard form factor we see everyone and their grandma rocking these days. ModeLabs Group has just revealed three concept phones to the public that are entirely self-sufficient. They say that these handsets “can be recharged naturally.”

First up, we have the YoYo (below in blue), which is designed to dangle from your neck. Assuming that you can pair it with a Bluetooth earpiece, the YoYo, as its name implies, will slowly roll up and down in front of you, generating kinetic energy to repower itself. It also boasts solar panels to soak in those glorious beams of light.

Next, the U-Turn (pictured right) is an “ergonomical and user-friendly” design that “recovers energy from the opening and closing of the keypad to recharge its batteries.” When not in use, you can presumably coil it up into quite the compact package.

Last but not least is the Runaway (below in yellow), dreamed up with “sportsmen and sportswomen” in mind. By attaching this device to your hip, wrist, or other body part (I’ll leave that up to your imagination, you dirty dogs), you can capture the kinetic energy you’re creating anyways and translate it to a form the phone can use.

A video presentation is available on the ModeLabs website.