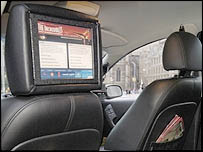 To the many complaintsâ€”that the drivers go too fast, take the long way, don’t speak Englishâ€”the Taxi and Limousine Commission had this to say: “Get a grip.”

OK, what they really said was something more along the lines of “Sit back and enjoy the ride.” Coming this week is a preview of some flashy new services for New York cabs, including a touchscreen built into the front seat headrests. You the passenger will see this touchscreen, of course, and you can watch TV on it! Isn’t that exciting?

The touchscreen’s other primary function, the GPS tracking screen, is likely to be more of a hit. You can follow your progress and maybe find out the names of some of the sights that you’re missing along the way. You can also pay by credit card using the touchscreen, which should make things a bit quicker.

What we’d really like to see is a touchscreen with a games console built-in, so you could play Grand Theft Auto.

The service as it stands, which is a significant upgrade on the existing New York taxi experience, will be seen in wide release by early 2007.