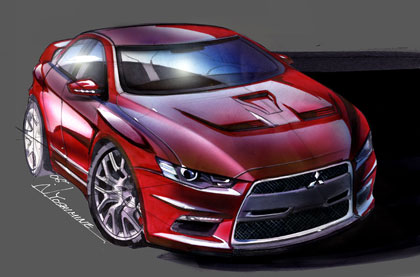 They may not quite be the Evolution X that every rally enthusiast is waiting for, but the Prototype X and the street legal all-new Lancer are set to be unveiled by Mitsubishi Motors in Detroit at the North American International Auto Show next month. As you recall, the Prototype X (you may have heard it being flaunted around as the Concept X) is said to be very close to what a production model Evo X would look like, especially considering its similarities to the street legal 2008 Lancer.

We have yet to see an official version of the Lancer Evolution X, but the press release from Mitsubishi did mention that they will be releasing the “next production version of the world-renowned Mitsubishi Motors rally-winning Lancer Evolution” later in 2007. No firm details, but the Evo will boast a “high performance engine, excellent dynamics and striking design [that] will appeal to enthusiasts worldwide.” Moreover, the new Evo will seek to find that delicate balance between daily driveability and high-end rally performance on the weekends.