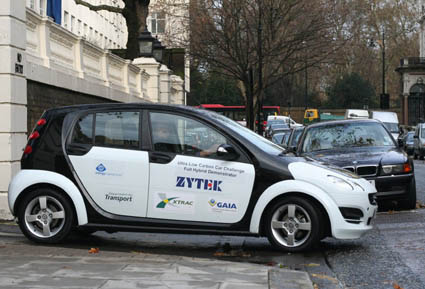 This seems like something that should get extra points from the Green Police. It’s a dual-mode diesel hybrid that’s been built into a SMART car. The model is the ForFour CDi, a three-cylinder special that looks more traditional than the popular image that many people have of the SMART cars. The existing model has been augmented with diesel and electric engines, for a whole lot of efficiency and a whole lot less in emissions.

The drivetrain is courtesy of Zytech, who have made quite a name for themselves this year by plunking their technology down in the DaimlerChrysler SMART EV. This would be one more feather in Zytech’s cap, especially popular with those looking to crack down on carbon dioxide leaking from vehicles.

This car is a demo model only, so it’s not like we’re going to see these buzzing around city streets in the next week or so. It is, however, a car of the future, perhaps the very near future.